The Spink History Since 1925

For a full detailed article of Spink history which was first written in the Mail Journal in July 1988 and has been rewritten by the Spinks own Robert Eppich, you can read that article Here

Two promotional videos were taken of the Spink Hotel to get the word out of what the Spink had to offer. You can click those links below

A Brief History with Images

The Spink Wawasee Hotel was originally built by the Spink family of Indianapolis in 1925 on the site of the Wawasee Inn Cedar Beach Club. The hotel thrived as a center of entertainment on Lake Wawasee, which offered free swimming, badminton, tennis, horse shoes, fields for games with soft ball equipment, croquet and ping pong. Also offered was a first class 18 hole golf course which adjoined the grounds. Speed boats were available for a nominal charge. The hotel orchestra played through lunch and dinner hours and for dancing. Charge for a single room was $9 per day, and a double room was $11 per day which covered room and meals. Every Room had a bath and phone. The Spink housed and entertained many of the wealthiest, and sometimes most notorious, characters of the era. The Baltimore & Ohio Railroad and New York Central Railroad provided passenger service to their own rail station, along with their own airport, though just a short walk away busses were provided to bring Midwest and national celebrities to its doors.

Below are many images that have been collected that shows the art work of the original hotel. To the South East you can see the adjoining auditorium where shows were held by the nations most talented stars. Click any image to view in full size, then click the back button to return to this page. 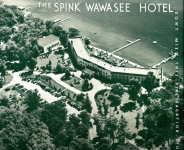 These Images show the royalty that would visit, Famous comedians Abott and Costello who were known to often visit. The second image is the members of the Spink Orchestra, The other shows a royalty family posing for pictures, and then the rail station that brought many travelers to the area.

The hotel had three floors. The lake floor level was taken up with the main lounge, dining room porch, sun porch, bar, cocktail lounge, dance pavilion, barber and beauty shop, soda fountain, cigar stand, and the club rooms. The second and third floors were given to sleeping rooms, 125 rooms in all including suites. These images show the interior. A commons area, a lounge and the front desk for checking in.

Following the deaths of various Spink family members, circa 1940, the hotel was shuttered and later sold to the Crosier Order of the Roman Catholic Church. After extensive remodeling, it re-opened its doors on August 15, 1948 as Our Lady of the Lake Seminary, with Father Leo Kapphahn, OSC as prior, housing 118 students. Much remodeling and construction continued through the 1950’s with the addition of a gymnasium, a library, and an auditorium. In 1965, the seminary was sold, and the facility was converted to a coeducational school known as Wawasee Preparatory, with Father David Suelzer, OSC as religious supervisor, and Father Thomas Scheets as principal. The facility operated until the summer of 1975 when it again closed its doors. This image shows the Church that was built along with an auditorium. 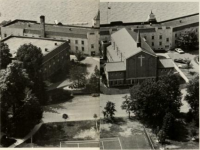 In the early 1980’s the facility was purchased by the Miller Family and reconstruction began to create the Wawasee Spink Condos, opening its doors for residents in the summer of 1984. No expense was spared to create the most prestigious condo facility in Northern Indiana, and the grounds and buildings today maintain the status as the “Gem of Lake Wawasee” These images show the Spink under construction, and shortly after it’s renovation to Condominiums. The other image shows the date which suggests a worker wrote on a concrete column, and was exposed during a later remodel of a condo unit.

In 2014 the Spink took on another renovation, offering new windows, and new sliding patio doors, while installing the latest in flashings and sealant. With a new seawall and giving even the pool a fresh overhaul shortly after. 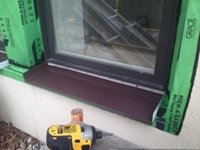 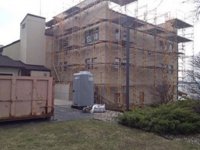 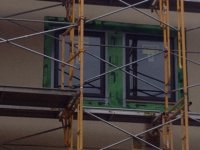 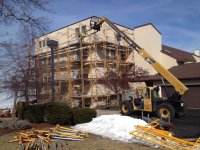